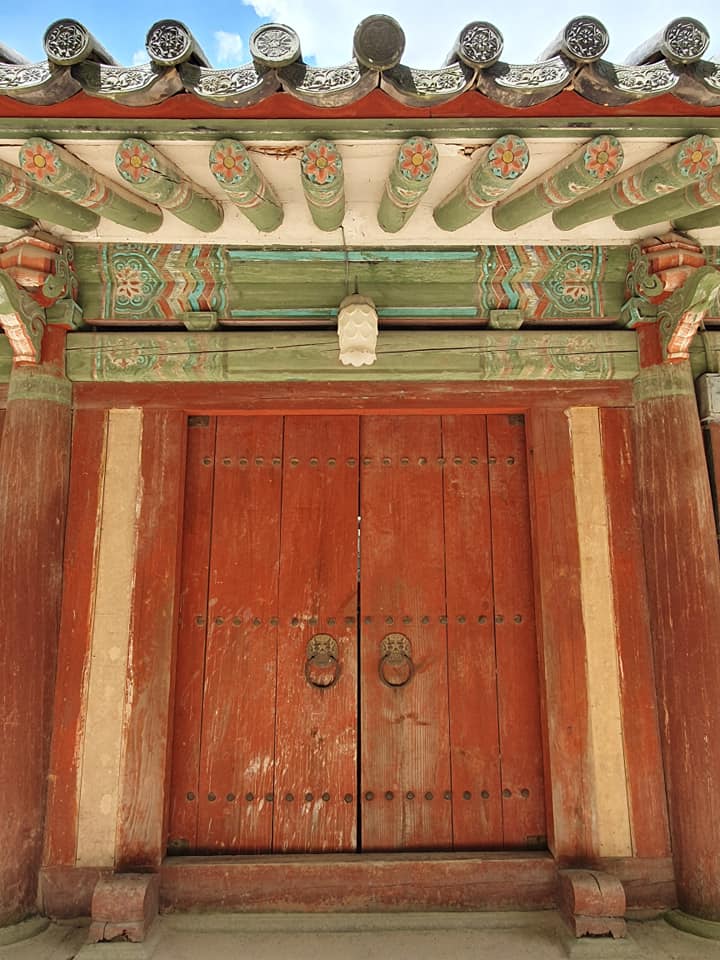 There are a lot of things to do and see on this ancient peninsula, but one choice remains a popular tourist destination – Buddhist temples. These come in all shapes and sizes as they seem to be sprinkled atop the rippling mountains and cityscapes. Their typically maroon, green, gold, and navy exteriors harmoniously clash with the sweeping green treetops, while the chants of grey and brown-clad monks usher those far-less modestly dressed inside. It’s hard to know where to start. That’s why we’ve put together a list of Korea’s 7 MUST-SEE temples that are sure to make your stay on the peninsula an even better one.

Jogyesa was built in the late 14th century during the Goryeo Kingdom period of Korea. In 1910, it was rebuilt under the name of Gackhwangsa (각황사) following a fire, and 26 years later it received its current title as the head of Korean Buddhism alongside a new name, Tegosa (태고사). After the Second World War ended and Korea regained its independence, the local people wished to purify Korean Buddhism from Japanese influences, leading the current compound to be completed in 1954.

Easily the most well-known temple by name, Jogyesa is not necessarily famous for its beauty, but for what it’s associated with. The small plot of land boasts the headquarters of the Jogye Order, the predominant Buddhist school in the country. It hosts large gatherings, conferences, and festivals alongside everyday worship. You can enjoy a vegetarian meal in the dining hall, visit the tourist office for event updates and craft workshops, and explore the nearby streets for Buddhist paraphernalia. My favorite sight is the towering 450-year old lacebark pine tree that has deservedly earned the title of National Treasure.

Bongeungsa is generally the second temple to top traveler’s lists, and rightfully so. Hannah even included it in her Seoul for Beginners article here. Not only is it located in the heart of one of the city’s most bustling districts, Gangnam, but it remains the perfect homage to the unique cityscape-natural fusion that Seoul actively promotes. With its neighboring skyscrapers, you can escape the noise and chatter to enter a more serene existence. Bongeunsa is definitely one of my top temple suggestions as it encourages meditation from the grind of city-dwelling.

Bongeunsa by its original name, Gyeonseongsa (견성사), was constructed in 794 C.E. of the Silla dynasty. It was renamed to its current title by Queen Jeonghyeon of the Joseon kingdom in 1498. The original location was nearby the tomb of King Seongjong, but it was transferred to Seoul between the years of 1545 and 1567. It is home to 3,479 scriptures and a well-known ceremony called Jeongdaebulsa (정대불사) where monks carry these texts on their heads and recite the ancient rites (Beopseongge – 법성게).

Where should I even begin? Well firstly, don’t come here on a rainy day! This spot is not one to miss in bad weather, as the predominant view is of the gorgeous East Sea. Famous among locals and even more so with tourists, this temple is not only a place of worship but also complete eye-candy. With colorful lanterns on display much of the year and towering statues of the zodiac animals, there are always great photo opportunities available. It’s also fantastic for laypeople with its numerous halls of worship and offering locations. Please take note of the winding staircase boasting 108 steps. Good shoes are a good idea here!

The temple was first constructed in 1376 by a renowned Buddhist teacher named Naong. However, the main sanctuary was only constructed in 1970. New Year’s Day is one of the key events here; locals flock to the shore to see the first sunrise and make an offering that their dreams will come to fruition. April is also a particularly popular time as the cherry blossoms come into full bloom, their pink petals matched perfectly against blue waters – almost like a Van Gogh painting.

Once leaving the parking lot of this 1995 UNESCO World Heritage Site, you certainly feel like you’re entering a dreamland. It’s a decently long walk up to the actual temple, but the surrounding gardens offer plenty of resting spots and beautiful wildlife to immerse yourself in, preparing your mind for a state of ease before actually entering. Bulguksa is famous for many different sights including its large, stone staircase, as well as the neighboring Seokguram Grotto (about a 30-minute bus ride through very curvy roads – a small warning for those afraid of heights).

Bulguksa’s history stretches back to 528 C.E. during the Silla dynasty. Originally built for peace and prosperity by King Beopheung, it was later rebuilt in 751 C.E. and remained as such until the Imjin War (1592-1598) when the temple caught on fire and was looted, suffering serious damage until 1920. It now holds seven national treasures and various important heritages.

It’s been a couple of years since I last visited Yakchunsa, but if one thing sticks out in my mind, it’s how quiet everything was. This temple isn’t the easiest to reach without a car, likely putting off a lot of visitors from making their way to this stunning sight. It’s certainly one you couldn’t miss, though. The temple’s two towers and massive staircase is as grand of a welcome as one can get, the largest in the East according to Visit Korea, and it’s even better when complemented by its incredibly friendly staff.

The temple is similar to others of early Joseon, with its towering 3,305 square meter size. However, the grounds are relatively new with the current layout having fully been established in 1982. The former hermitage was designed to host many devoted monks and maintains such a tradition today through temple grounds and a popular templestay program.

Aside from the fact that Haeinsa houses over 200 national treasures, it was listed as a World Heritage Site in 1995, and is well-known for its ancient architecture – the home of Tripitaka Koreana. Never heard of it? The fabulously long text took over 16 years to complete (starting in 1236 C.E.) and was made as a wish to overcome the national crisis of the Mongolian Invasion. The 81,340 blocks include 6,791 volumes in total. Today, this text is stored as printing blocks in the temple and draws in history lovers and devoted Buddhists from all over the world.

Haeinsa was founded in the year 802 C.E. The term ‘Haein’ comes from part of a Buddhist scripture that notes the ‘truly enlightened world of Buddha and our naturally undefiled mind’.

Another temple that isn’t so easy to get to for most travelers is Hwaeomsa, whose natural surroundings wear the faded red facades proudly. This temple is sprawling and offers plenty of space for a stroll. If you’re inspired by the gorgeous simplicity of these grounds, be sure to learn more at the accompanying museum, or even pay a simple fee of 10,000 won for a personalized roof tile.

Like many temples in Korea, Hwaeomsa, erected in 544 B.C.E., was destroyed by fire during the Imjin War. Reconstruction to today’s state was completed in 1701 during King Sukjong’s reign of the Joseon Dynasty. Today, the stunning amenities and highly reputable templestay program have positioned the sight as a head temple of the Jogye Order.

Korea is home to thousands of Buddhist temples that are almost all worthy to note. I hope that this gives you somewhere to start. You may also be worried about temple etiquette and how to behave properly in Korean places of worship, which is why we already wrote an article about that here. Which one seems the most intriguing to you? Which ones are left on your list that you haven’t been to yet? Leave us a comment below and let us know!

Hapjeong: 5 Cafés With A Chilled-Out Vibe