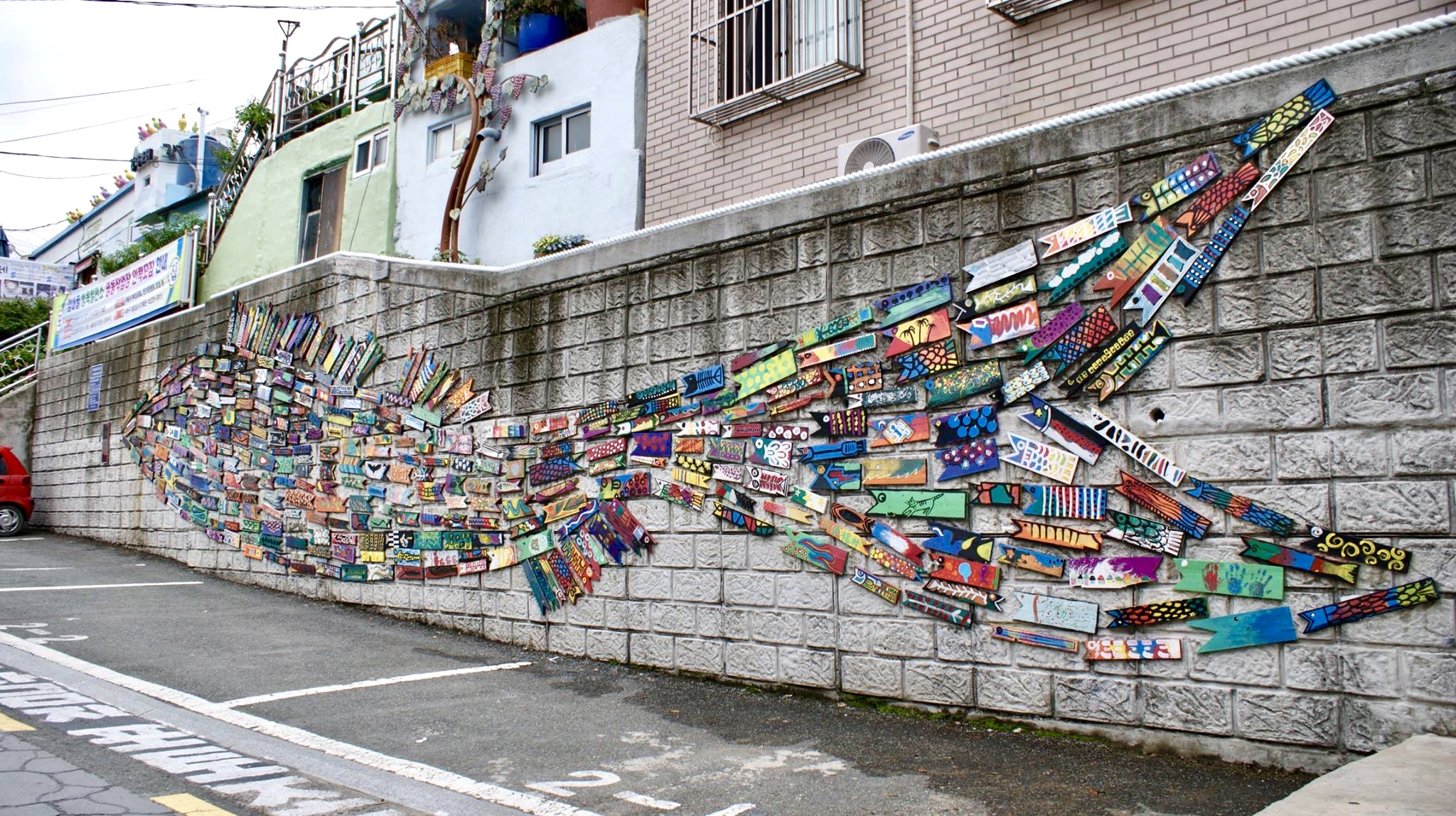 Korea is a country that has developed incredibly quickly over the last 70 years. After the country rebuilt itself from the rubble of the Korean War, the 1980s saw a boom in city living, with a huge amount of people moving away from the countryside and into the main metropolises to work office jobs and get an education. Rich neighbourhoods became richer, but poor neighbourhoods became poorer. During the last couple of decades, regeneration projects have been carried out across the country, turning some of these poor neighbourhoods into artistic centres for the community and tourists alike to enjoy.

Arguably the most famous of these rejuvenation projects is the Gamcheon Cultural Village in Busan. Gamcheon Village was built in the early 20th century, housing the poor population of the 1920s and 30s away from the city’s port – but not so far away that they couldn’t provide the port with labour workers. Over time, as the rest of the city developed so did Gamcheon, but it still remained one of the poorest areas of the city. In 2009 a project was initiated to bring tourism (and thus money) to Gamcheon, and so professional artists worked alongside art students and the residents of the village to turn the area into a tourism hotspot. It’s now the famous rainbow village of Korea, popular with people all over the world visiting its many wall and stairs murals.

Ihwa-dong is a neighbourhood that was formed of refugees from the Korean War building houses anywhere they could. Located near to Dongdaemun, many people in the village worked in the textile industry, and moved away from the area as the rest of the city developed. By the early 2000s the only residents left were elderly people and poor families, and the neighbourhood was due for destruction. But the Korean government’s Ministry of Culture, Sports and Tourism stepped in to save the area through its ‘Art in the City’ initiative. In 2006, work started on Ihwa-dong to turn in into Ihwa Mural Village. Art students, professionals and locals took 6 months to create a plethora of beautiful murals for people to admire and take photos with. While some of the more popular murals have recently been painted over by some disgruntled residents, it’s still a great place to stop in for refreshments while walking Seoul’s city wall along Naksan Park.

Jeonju is most famous for its beautiful hanok village, but it’s also home to a reformed village – Seonmi Village. Part of the Nosong-dong neighbourhood, Seonmi Village is a former red-light district that is now an art and culture centre. When most of the 400 sex workers had moved away from the village after prostitution became illegal in 2004, only a bad reputation was left behind. A rejuventation project began in 2016, and local artists, former residents and schools from the area took part in turning the area into a place where people can go to enjoy art and culture. Nowadays, there are several art installations, an outdoor resting space, a small gallery and a library-cum-bookstore for people to enjoy.

Address: 7 Murwangmeol 3-gil, Seonosong-dong, Wansan-gu, Jeonju-si, Jeollabuk-do
How to get there: Take bus 976 from Jeonju Bus Terminal to the Traditional Market stop. Walk 5 mins to the museum in the art village.

Despite the downfalls of its immense, intense development, Korea has been making efforts to revive some of its forgotten, neglected neighbourhoods around the country. These former ghettos and red light districts are now small havens of art and culture with a distinct Korean style. Take a wander through their alleyways and experience their history and newfound beauty for yourself.

Who was Crown Prince Hyomyeong?