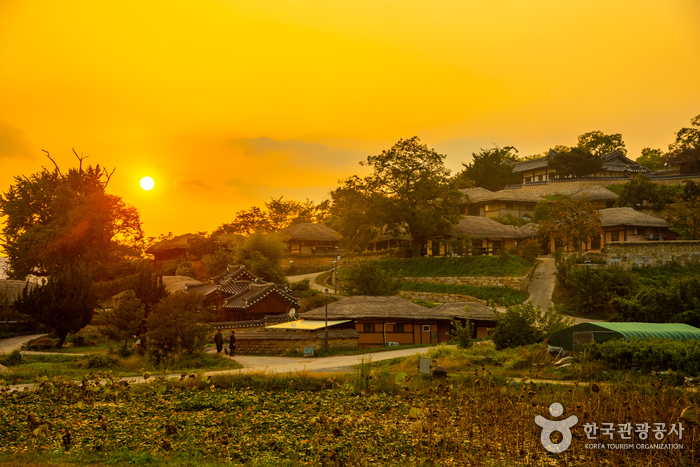 Chuseok 추석 is a holiday of family celebration known in English as the Harvest Moon Festival. It takes place every year around the middle of September and sees 25% of the population head to their rural hometowns. The first thing one does when arriving is to pay respect to one’s parents. Next is visiting the family’s ancestral graves, followed by a feast with loved ones. Although much of Korea is now urbanized, Chuseok remains one of the country’s strongest traditions.

That being said, when you’re a foreigner living in Korea without a family unit, Chuseok might mean solo or group travel. A few days off of work rolls up quicker than expected, and the next thing you know, you’re looking for a unique domestic travel destination. With histories as old as Chuseok itself, here are 3 historical travel destinations for this year’s holiday season. The best part? They’re probably out of the way of that nasty Chuseok traffic.

Filial piety. Loyalty to one’s parents. A defining pillar of Confucian morality. But how can we see it expressed physically? Hwaseong Fortress, aka Suwon Fortress or Suwon Castle, is unarguably the most famous landmark in Korea dedicated to filial piety, making it our #1 choice for the Chuseok holiday.

Hwaseong Fortress was constructed towards the end of the 18th century and is made up of a 5.4-kilometer wall that was, in its heyday, heavily fortified. In 1789, King Jeongjo 정조 (r. 1776-1800) moved the tomb of his infamous father, Crown Prince Changhon (aka Sado 사도) to the western side of Mt. Hwasan 화산. Why? This is because Mt. Hwasan had the reputation of being the most auspicious site for a tomb in the entire kingdom. There was just one problem. There was already a city – Suwon – on top of it.

Suwon was no match for Jeongjo. The King had the city moved 5 kilometers to the north just so he could relocate his father’s grave. Talk about devotion. This immense display of respect and honor is the most touching story of familial devotion that you’re likely to hear this season. Head to the fortress for a gorgeous afternoon stroll, a traditional archery experience, or a tourist trolley ride.

Although it’s a bit further from Seoul than Suwon, Yangdong Village is a staple of folk history as well as a lush destination for natural surroundings. In fact, it’s so heavily protected by neighboring mountains, rivers, plains, and forests, that the tiny village is hardly visible from the main road. If you’re looking for a truly private getaway, look no further than Yangdong.

Yangdong is a village full of family feuds and drama, initiated by the arguing of two local clans, so it certainly also doesn’t lack in history. There is a plethora, a treasure trove, of cultural assets tucked away between the fading wooden facades. Yangdong Village is home to three national treasures, nine important folklore objects, one tangible cultural asset, and one natural monument. What’s unique is that all of these come in the form of buildings, with the area’s only rival being Haehoe Village in Andong. In addition, there is a collection of 15 houses that have stood for over 200 years. Old but gold, as I like to say.

Don’t only visit this remarkably gorgeous village, but be sure to check out Oksan Seowon, a private Confucian academy that also functioned as a shrine. A designated Cultural Site, Oksan Seowon was erected in 1574 C.E. More than 1,000 ancient texts are stored here including a copy of Kim Bu Shik’s 김부식 Samguk Sagi 삼국사기 (History of the Three Kingdoms), the oldest extant Korean history.

Whether you consider yourself a scholar or not, this stunning region is a unique spot not often suggested by guide books and travel sites, but one that will certainly impress you nonetheless. For a truly authentic experience, rent one of the traditional hanok homes (at least three months in advance is suggested).

Located in the stunning Seoraksan National Park 설악산국립공원, Mt. Jeombongsan is one of those special peaks with an ancient story to tell. While all of the mountains in the park are breathtaking, Jeombongsan reunites us with the mother we all share: mother nature.

Jeombongsan differs from its peaked neighbors due to its numerous flowers and trees that have given it the title of UNESCO Biosphere Conservation Area. It’s home to over 800 species of trees and 36 species of flowers and shrubs. One of the most significant sights is of Hangyeryeong Grass 한계령, a plant only found in Korea. This has also won it the title of ‘virgin forest’ – because it’s singular existence. Due to the highly protected nature of this area, you may have to look into getting special access to hike. There are, depending on the season, online applications you can fill out to be selected as one of the lucky hikers. Read more about this process from the hiking bloggers Peaks and Penguins.

Not only can you go hiking and soak in the gorgeous wildlife, but you can also head over to Osaekyaksu 오색약수터, a hot spring located in the region. The water is said to cure all sorts of ailments such as skin diseases, neuralgia, and anemia to name a few. And while this mountain doesn’t enjoy the popularity that its neighbors, Odaesan 오대산 and Soraksan 설악산 do, Jeombongsan is a silent retreat that’s sure to soothe the soul in what is otherwise a rather chaotic holiday season.

5 Day Trips From Seoul Not In Your Guide Book