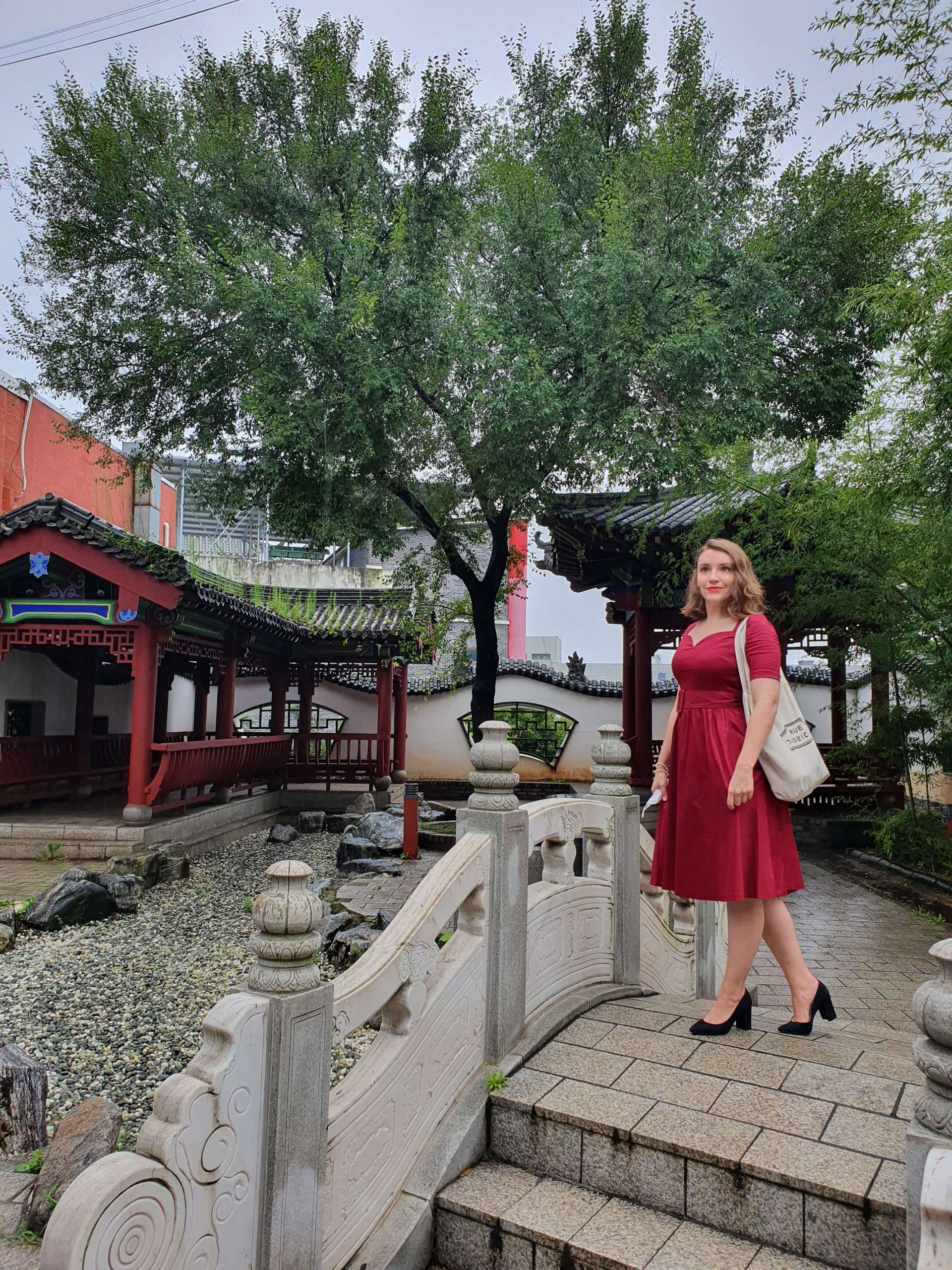 The Seoul subway holds many surprises, secrets, and of course amazing tourist spots. We’re certain you’ve heard of some famous ones: Hongdae, Anguk, and Gyeongbokgung. But did you know that slightly further outside of Seoul lies a plethora of hidden historical travel destinations waiting to be explored? The best part is that you won’t have to pay a pretty penny to get there. After all, they’re all accessible by the Seoul subway.

Yeongneung is a joint tomb of King Sejong (1397-1450) and his wife Queen Soheon (1395-1446). As it was the first joint tomb to ever be constructed in the Joseon dynasty, it holds significant value to Korean historians. King Sejong was one of the most brilliant minds in Korean history, and certainly its greatest king. You can learn more about his life and accomplishments through our ‘Why is King Sejong So Awesome?‘ article.

The tomb was originally located in Seogang, Gwangju but was relocated outside of Seoul in the city of Yeoju-si, Gyeonggi-do. When it was constructed following Queen Soheon’s death, it was decided that it was to be built as a join tomb with Sejong’s spot being reserved even before he passed. The tomb later moved due to geomantic traditions and the belief that Gwangju was not auspicious enough for the beloved couple. Upon excavations in the late 1970s, various items belonging to Sejong and his wife were found and relocated to the King Sejong Great Memorial Hall in the heart of Seoul (also accessible by the Seoul subway).

Next to Yeongneung rests Nyeongneung, which is the royal tomb of King Hyojong (1619-1659) and his wife Queen Inseon (1618-1674). The tomb was originally west of King Taejo’s tomb, the first ruler of Joseon, but in 1673 cracks began to appear on the tomb’s stone border and it moved to its current location.

King Hyojong was a strong military ruler of Joseon who devised a plan to conquer the northern region of Asia, at the time belonging to the Qing. In order to do so, he set about making great military reformations and enforcements. This was due to his time spent in Northern China as a hostage after his father, King Injo, lost the battle of Namhansanseong. Although the time was difficult for the young Prince, he was able to learn about many foreign cultures and technological advancements through ambassadors living in China at the time. As Korea was a hermit country, there was no way to gain access to scientific and mathematical information from other countries at the time except through China. When a group of Dutch sailors later became shipwrecked on Korean shores, it was Hyojong who ordered them tobuild the Korean army’s first muskets.

This Confucian Academy honours the memory of Lee Gok (1298-1351) and Lee Saek (1328-1396) of the Goryeo Dynasty. Both were well-respected writers and teachers of the Confucian doctrine and inspired many followers during their lives. Although the school was originally built in 1594, its story did not last long as it fell victim to the Imjin War Invasions between 1592 and 1598. It was swiftly rebuilt in 1610 and named a private institute the following year.

Although most of the structures today are replicas, there is still much to see and do on the original grounds. The academy consists of an educational area as well as a shrine. Visitors can spot mortuary tablets of five great Confucian scholars including the aforementioned as well as Lee Jong-Has, Lee Ja and Lee Gae while enjoying scenic views.

This royal tomb complex brings together three key grounds: Gongneung, Sunneung and Yeongneung (공릉, 순릉, 영릉). Gongneung holds the remains of Queen Jangsun (장순왕후, 1445-1461), wife of King Sejong. Jangsun was the daughter of an influential politician at the time, Han Myeong-hoe (한명회), but sadly passed only a year after her marriage to the Crown Prince in 1460. As she was the wife of a Crown Prince rather than a King, nothing but modest slabs protect her tomb.

Sunneung honors Queen Gonghye (공혜왕후, 1456∼1474), wife of King Seongjong (성종, 1457-1495). She also passed shortly after her marriage, gathering a mere five years with her husband. As she was the wife of a King, her tomb is surrounded by a balustrade and various stone sculptures. Their style is distinctly from the earlier years of the Joseon Dynasty and shares similarities with Geonwonneung and Heonneung tombs in Gyeonggi-do Province (건원릉, 헌릉).

Yeongneung is the tomb of Crown Prince Hyojang (진종, 1719-1728) who passed at an early age. Despite being an illegitimate son of King Yeongjo, his father loved him dearly and grieved for many months after his passing. Yeongjo’s next son, Crown Prince Sado, is infamously known as an unstable tyrant who tortured men and women of the court. Yeongjo placed Sado into a rice chest to starve, and Yeongji made Sado’s son (King Jeongjo) adopted by the deceased Hyojang in order not to tarnish the family’s reputation. Jeongjo later fought to keep his true father’s memory alive, despite the wicked acts he had committed.

Filial piety. Loyalty to one’s parents. A defining pillar of Confucian morality. But how can we see it expressed physically? Hwaseong Fortress, aka Suwon Fortress or Suwon Castle, is the most famous filial landmark in Korea.

Hwaseong Fortress was constructed towards the end of the 18th century and is made up of a 5.4-kilometer wall that was, in its heyday, heavily fortified. In 1789, King Jeongjo 정조 (r. 1776-1800) moved the tomb of his infamous father, Crown Prince Changhon (aka Sado 사도) to the western side of Mt. Hwasan 화산. Why? This is because Mt. Hwasan had the reputation of being the most auspicious site for a tomb in the entire kingdom. There was just one problem. There was already a city – Suwon – on top of it.

Suwon was no match for Jeongjo. The King had the city moved 5 kilometers to the north just so he could relocate his father’s grave. Talk about devotion. This immense display of respect and honor is the most touching story of familial devotion that you’re likely to hear this season. Head to the fortress for a gorgeous afternoon stroll, a traditional archery experience, or a tourist trolley ride.

Jingwansa Temple is located in Bukhansan National Park (북한산국립공원) at Seoul’s northern point. It was built during the Goryeo Dynasty (고려) in 1011 by King Hyeonjong (현종, 8th King of Joseon) in honor of the great Buddhist priest Jingwan. Jingwan saved the King’s life when he was a child, to which the King repaid him through the construction of this stunning temple. This is one of the temples available for a Templestay in Seoul and one of the most popular – don’t miss out!

In particular, Jingwansa boasts its famous temple food. As it is one of the four largest temples in Seoul, the temple is a hot spot for foreign ambassadors, political leaders, and cultural frontrunners to learn about Korean temple food. What are you waiting for? To learn more about temple food, you can also visit the temple food center in Insadong.

The original Tangchundaeseong Fortress was constructed during the Joseon Dynasty in the year 1712. Its sole purpose was to improve the defence against the Seoul City Wall (한양도성) and Bukhansanseong Fortress (북한산성). Consider it a fortress to a fortress, eh? Hongjimun Gate, however, was built during the reign of King Sukjong (숙종, 1661-1720), the 19th King of Joseon. Legend has it that the King himself carved the gate name.

The area is now a much beloved hiking route for Seoulites and those living in nearby Gyeonggi-do Province cities. The trail is not too difficult to hike, with gentle slopes that are nothing more than a morning stroll for avid hikers. The gate is slightly far from the subway, however, and may require an additional bus if one isn’t keen on walking.

Incheon is a town of many choices. With so many things to see and do, where does one start? If you’re traveling by subway, the best place to hop off and get a feel of the International city is easily Incheon Art Platform and Incheon Chinatown. Starting with the Art Platform, you will notice the architecture here is mostly from the 1930s-40s. This is due to the area formerly being part of the Nippon Yuseun Kaisah, an industrial hub during Japanese colonisation. Several other buildings were constructed as Korea began to open its doors to the outside world, such as the first hotel for international travellers in Korea. There are various historical museums, contemporary art galleries and cultural spaces to check out in this up-and-coming neighborhood.

This growth also expanded the nearby Incheon Chinatown, which officially opened in 1883. With its growing Chinese population, Incheon swiftly became an extra territory of the Qing Dynasty the following year. The area was once known for its imported trading goods, but today tourists are more likely to find Chinese restaurants. 2nd or 3rd generation Chinese remain here, many of them being descendants of the early settlers. You can taste many flavours of Chinese cuisine here, ranging from spicy southern dishes to the famous dim sum of Hong Kong.

Seoul Is the Most Romantic City on Earth. Here’s Why.