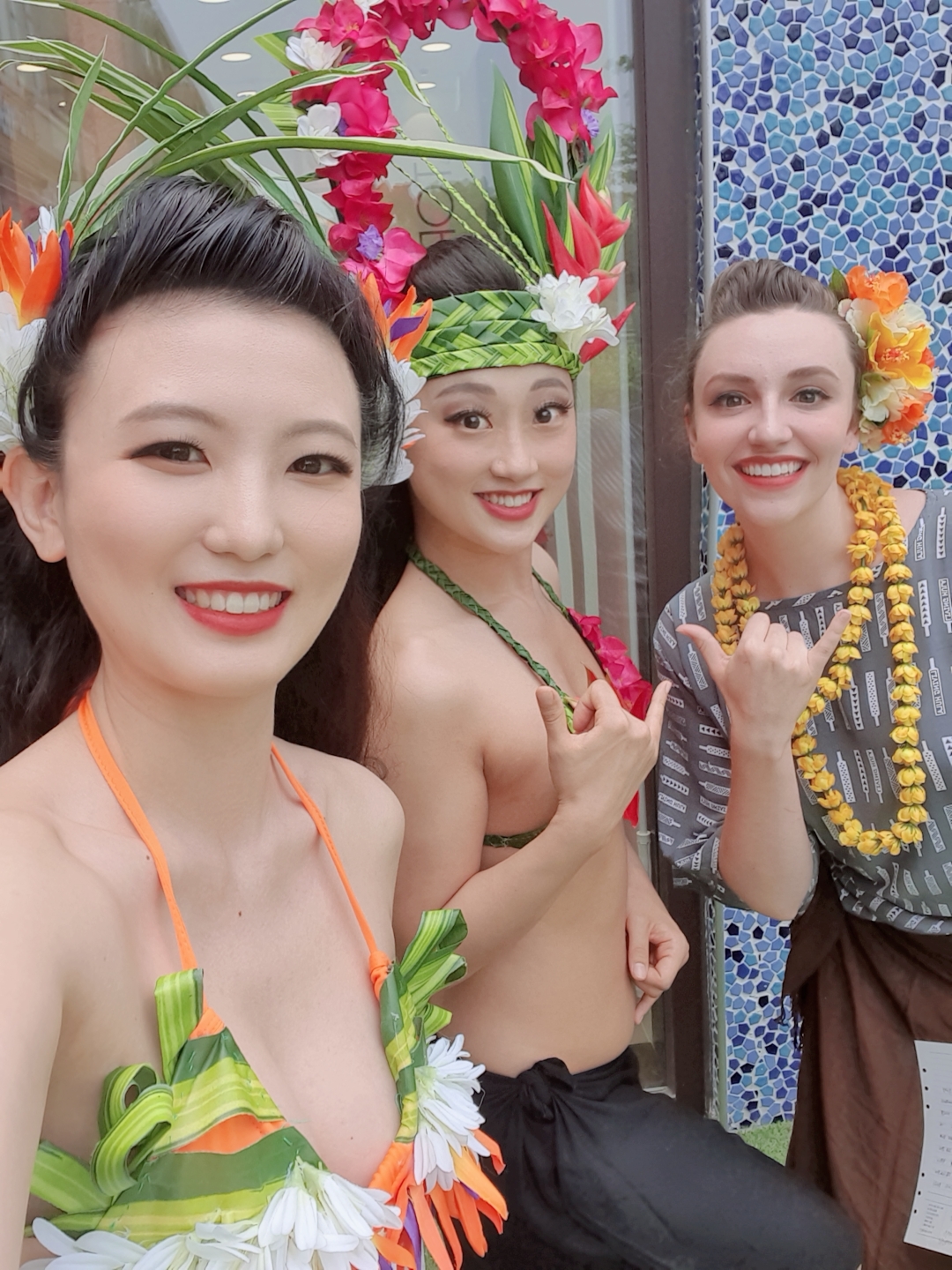 Are you looking for something unique and educational to do while living in Seoul? Have you always held an affinity towards the Polynesian Islands? Let me introduce Waiola, a hula and ori tahiti halau located in the capital of South Korea. With an expert instructor and amazing students, this halau is a one-of-a-kind place for dance, music and friendship.

I joined Waiola over one year ago and have found my ‘happy place’ through our Hawaiian themed studio. I first decided to begin hula dance due to my experience working with First Nations people around the world. What better way to learn about a culture than to immerse yourself in it?

Hula is a Polynesian traditional dance form that it paired with either a chant (oli) or song (mele). The dances tell a story that matches the lyrics.

There are various types of hula dance, but there are two main forms: kahiko and auana. Kahiko is the ancient form of hula that was performed before Western encounters, while auana is the more ‘modern’ style developed afterward that is commonly performed with guitar, ukelele, or double bass instruments. Due to the more sacred nature of kahiko, it is not often practiced by those without Hawaiian heritage (hint: I practice auana).

The history of hula is long, complex and at many points (due to white people) almost nonexistent. There were periods where hula was performed as a circus sideshow, a Hollywood spectacle, and as underground sex shows. It was even altered to fit Christian sensibilities, covering the dancers in ‘modest’ outfits from nearly head to toe.

If you want to know the history of hula more deeply, you had better read it from the words of a native Hawaiian and hula dance expert. I highly recommend the book Kumu Hula Roots and Branches by Dr. Ishmael W. Stagner. Click the title above to purchase!

What is Ori Tahiti?

Tahitian dance, otherwise known as Ori Tahiti, is a Polynesian dance famous around the world for its dynamic and powerful hip movements that coincide with energetic drumming and cheerful songs.

Tahiti is a large section of islands located in the South Pacific. Some of you may know it better as French Polynesia, but for understandable reasons, I’m not too keen on that word. There are five specific sets of islands: Society Islands, Tuamotu Archipelago, Marquesas Islands, Gambier Islands and the Austral Islands. The history of these islands could date back to 1,000 B.C., although there is some evidence that it reaches even further to 200 B.C. Whenever society here started, dancing was at the forefront.

Similarly to hula, dancing was used for many purposes such as seducing a lover, worshipping the Gods or as a part of prayer. Like many stories around this part of the world, the British colonized the islands in the 1800s. Traditional dancing was seen as hedonistic and the culture was banned. It is believed that the dances were completely eliminated between 1820 until 1950. Now, a new generation has brought the beloved tradition back and has inspired people around the world to form their own Ori Tahiti communities.

Who teaches the class?

Waiola classes are organized and taught by the always-friendly CheChe. At least, that’s the name she prefers to go by. Her English may be limited, but she’s always welcoming people from different backgrounds. After all, dance has no language.

CheChe is Korean by race, but her most comfortable language happens to be Japanese, while Polynesian culture is what makes her heart pound. After spending the majority of her life in Japan and only returning to Korea in recent years, it was there that she began her love affair with Hawaiian & Tahitian dance. In 2020, she has been dancing for 12 years. After quitting her company job, she danced every day of the week with 6-hour classes every Saturday. Talk about commitment!

For those who do not know, Japan has one of the world’s largest communities of Hula and Tahitian dancers in the world outside of the islands themselves. Japan has greatly embraced this foreign culture and seems to respect it immensely due to its numerous dedicated Halau*. Then again, I am not a native Hawaiian, so I don’t have the full authority to state this with certainty.

*Halau – A Hawaiian dance group, often translated as ‘school’ or ‘academy’. Halau groups are like families and tend to be very close to one another.

What classes are available and what are the prices?

Currently, there are several classes available at Waiola:

Your first dance class is free. Subsequent classes will be 25,000 won each (100,000 won per month). Tahitian Drumming is 10,000 won per lesson. Starred classes vary depending on the materials provided to students.

Is it only for one gender?

No. Classes are open to everyone, regardless of how you identify. Our halau stands by these principles.

What is the dress code?

Like most dance classes, you should dress comfortably for your first day. Depending on which studio you go to, you may even have the opportunity to borrow a pau (Hula skirt) or pareo (Tahitian skirt for women). For a man, they could be asked to wear a maro (Tahitian loincloth) or perhaps just loose shorts for practice. For hula, men wear grass skirts over a pair of trousers.

If this is something you are committed to, then you will eventually be asked to purchase your own clothing or have CheChe make one for you at the price of 30,000 won.

In terms of a top, bring something that you don’t mind ruining. Trust me, you’re going to sweat. A lot.

Where and when are the classes?

Classes are held in varying locations depending on your availability and where you are comfortable traveling to.

Firstly, classes are available on Thursdays in the early afternoons (times change regularly depending on who attends, but usually it is around 1pm). The studio is a short walk away from Sadang Station (사당역), Line 4.

Saturday classes begin at 11am (Tahitian Drumming), followed by Beginner’s Hula at 12pm, and Tahitian Dance from 1-3pm. This totally Hawaiian-style studio is suuuuper adorable, but is a bit further out at Indeokwon Station (인덕원역), Line 4.

Additionally, a new slot has opened near Gangnam Station. You can attend a beginner’s hula class on Thursday evenings. For exact times, please contact CheChe. For privacy purposes, the exact locations will not be given out unless the student is registered.

Message Waiola on Instagram via DM, or contact them through their Naver blog (see the top of the article)! Korean is preferred, although English is possible.

Do I have to perform?

No! Performances are optional. If you are excited and want to show off what you’ve got, then go for it! Although, CheChe will urge you to do it in order to build your confidence. She asked me to perform after three months. Yikes. But, it did help me to improve for the next show. I’ve definitely got a long way to go, but where I was once very apprehensive about performing, I now wish I had more opportunities.

Wondering where we perform? The venue can change from time to time, but our most common spot is Bonjour Hawaii at Gwanggyo Alley Way, about an hour outside of Seoul.

Is it disrespectful for me to learn if I am not a native Polynesian?

This is a question that many non-Polynesians struggle with, including myself. With everything that is related to a culture that was colonized, it is a sensitive subject. You need to ask yourself if you are ready to take this seriously, to be dedicated and respectful, and to always remember where the dance and movements came from. Many of these dances have very sacred histories and are used to represent a large group of people with an ancient culture. If you have the mind and the heart to honor it, and never forget your place in the greater narrative, then you can consider dancing.

Once again, I am not a native Polynesian, so you might be more curious to hear the opinion of several Hula & Tahitian dancers via YouTube or various websites.

There you have it! Hula and Tahitian is FULLY available and waiting for your dancing hips in Seoul! Remember, it’s always a free first class, so if you’re unsure, just give it a try and see how it goes. Our halau has a very friendly and welcoming atmosphere. There are many body shapes, ages, and lifestyles represented by our group and I’m certain that you’ll feel at home. Mahalo!