Korea’s Mother of Pearl Lacquerware: What it is and Where to Buy It 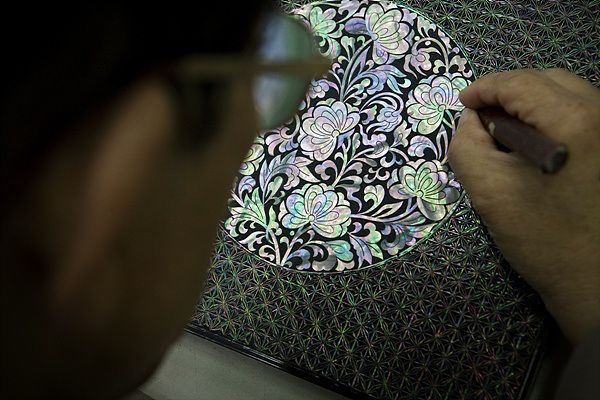 Walk into any tourist souvenir shop and you’ll see it sitting up high on the shelves, shining a rainbow under the fluorescent lighting: Mother of Pearl. The beautiful laquered and nacre inlay items are a very popular (yet very expensive) gift to take home to family or friends from a trip to Korea. But what is it? And how did it come to be so popular?

Mother of Pearl: An Introduction

Mother of Pearl, also called nacre, is a naturally occurring material that is found in seashells. You can usually see it exposed on the inside of shells and sometimes on the outside, though in this case it’s usually covered with a camouflage layer. In Korea, the Mother of Pearl that is used to create the beautiful inlaid lacquered pieces comes from abalone shells. These pieces are called ‘najeonchilgi’ in Korean, with ‘najeon’ meaning ‘Mother of Pearl’, and ‘chilgi’ meaning ‘lacquerware’.

The History and Meaning of Korea’s Mother of Pearl Lacquerware

With evidence of Mother of Pearl lacquerware being used in some of the earliest Chinese cultures, and some of the oldest Japanese, Korean, and Thai works being dated back to the 8th century CE, najeonchilgi is certainly not unique to Korea. It is thought that the craft arrived in Korea sometime during the Silla Period (57-935CE) by way of the Chinese Tang Dynasty, however it gained traction during the Goryeo Period (918-1392CE) and became representative of Goryeo to the outside world.

Najeonchilgi designs during the Goryeo era featured lots of intricate chrysanthemums and vines, though as the times and era changed, so did the designs. The Joseon Period (1392-1910) saw a clear evolution in najeonchilgi patterns. Likely because of the Joseon dynasty’s Confucian values, the designs were usually larger but more simple than those of Goryeo, featuring lots of natural imagery. Early Joseon saw an abundance of lotus flower, phoenix and dragon designs, and mid-late Joseon saw the incorporation of bamboo, peonies, birds and other flowers. The end of the period brought yet more changes, with artists expressing themselves more freely through the medium of najeonchilgi, creating new methods of using the Mother of Pearl and different styles of design. Around this time, a lot of pieces featured images of the ‘Ten Elements of Longevity’, the ten (sometimes twelve) symbols from Daoist culture that were thought to encourange a long life.

During Japanese occupation the craft was hard-hit, with people unable to continue making najeonchilgi, but the liberation of Korea from Japan in 1945 saw the craft rise again. It bloomed in popularity in the 1960s alongside the developing economy, with the craft being named intangible cultural heritage no. 10 in 1966, and rode this wave until the 1990s.

Since as long ago as the Goryeo Period, najeonchilgi has been a clear symbol of social and financial status. During the Goryeo era most of the people who owned Mother of Pearl lacquerware were aristocrats, and the pieces were often gifted to foreign delegates and send to kingdoms overseas. Despite the cost, najeonchilgi were admired by the common people as well as upper classes during the Joseon era for their depiction of simple everyday life and nature. But in the 1960s and 70s, Mother of Pearl lacquerware became symbolic of wealth, owing to the incredibly expensive price tags attached to it.

Where to Buy Korean Mother of Pearl Lacquerware

Want to get yourself some Korean Mother of Pearl lacquerware items now you know all about it? There are many different places you can buy it, and in many shapes and sizes too. Despite its previously very high price tags, nowadays najeonchilgi is widely accessible to people with budgets low and high. If you know where to look you can get some really good deals on these beautiful items. Below are some of our best suggestions for buying Mother of Pearl laquerware of every type and condition, and at all price points.

Mother of Pearl lacquerware items make beautiful gifts and souvenirs from your trip to Korea. The decoration technique can be found on all manner of items and in many different styles all across the country. If you’re looking for something small to fit in your suitcase, or are on a small budget, pop into any gift shop and you’re bound to find some sort of najeonchilgi on offer, whether it’s a handheld mirror, a keyring, earrings, or even a USB stick. If your budget stretches a little further, take a look at one of the quintessential jewellery boxes on offer – they’re usually stored high on the walls of the gift shops due to their high price point compared to other souvenirs. Or maybe you’re looking to splurge on a piece of traditional homeware or furniture? There are many stores around the country dedicated to selling najeonchilgi, but if you want to find the best pieces in the country you should head to the city of Tongyeong. It’s been considered the home of the najeonjang craft since the early 1600s, and is where many long-time masters of the craft reside and work.

Don’t have the budget for brand new Mother of Pearl lacquerware products? No problem! Here at Moon Bear Travel we’re big fans of buying second-hand, and have even scored our own najeonchilgi bargains this way too.

Keep learning with Moon Bear Travel!
Find us on Facebook and Instagram as @MoonBearTravel, and become one of our supporters on Patreon for even more knowledge on Korea and exclusive benefits.