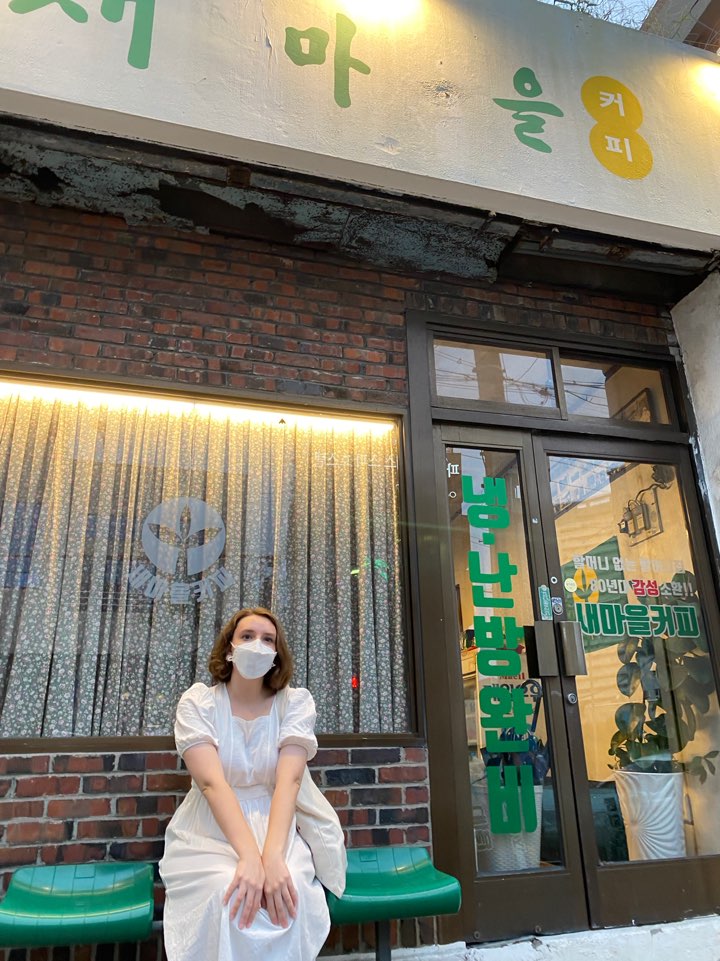 Have you ever watched an old film that was so visually intoxicating, so nostalgic despite you never living in that time, that you just wanted to dive in without a second thought? There’s unarguably a romanticism to be found in most histories. Despite hardships and injustice, it can be easier to look back on the past than to actually live it. With the ‘newtro’ (new + retro) wave sweeping across Korea, vintage cafes and fashion shops are popping up around the country. The New Village Cafe (새마을 커피) in Yeosu is the poster child for this trend, as it welcomes its guests into the space of a modest 1980s Korean home.

What is the ‘New Village’?

The name itself, New Village (pronounced sae-ma-eul in Korean), is not actually new to locals. The name of this Yeosu cafe harks back to a key point in Korean history, the New Village Movement (새마을 운동 sae-ma-eul un-dong), a political initiative launched in April of 1970. The President at this time was Park Chung-hee (박정희), who was also the figurehead and creator of this movement. Park is often considered an authoritarian leader who controlled the country for 16 years after the Korean War (1950-1953). His daughter, Park Geun-hye, was impeached as the President in 2017.

But what’s the movement about? As most Korean villages are agricultural communities, it was difficult for the government to properly economize rural neighborhoods. The concept is arguably based on traditional forms of communism that originated in Korea called hyangyak (향약) and doorae (두래), which touch on self-governance and cooperation between residents of a community. As the rest of the country industrialized, smaller villages continued to struggle financially as well as adapt to the industrial life of the 20th century.

The key traits of this movement were diligence, self-help, and collaboration with other community members. Through this, villages could become more financially successful and, of course, benefit the country as a whole. The first stage focussed on improving living conditions, while later stages focussed on sturdier infrastructure and an increase in income.

Like most of Park’s accomplishments, the New Village Movement saw its heyday in the 1970s, followed by a lack of progress in the 1980s. This was mostly in part to the president’s assassination in 1979. Without its figurehead and the movement already being somewhat of a success, it seemed that the need to propagate the narrative was no longer necessary. However, you can continue to see this organization all across Korea, albeit at a reduced size and pace.

The cafe is decorated with antique goodies such as a working television, records, a faux leather couch, and floor tables. You can also purchase retro candies alongside your coffee at the cash register. The layout is just as one would have found it at the end of the 20th century.

This cafe was such a pleasure to experience with my boyfriend, who recognized many items in the ‘house’. I’m a true antique lover, having started the first vintage meetup in Korea, and being able to step into a time capsule while simultaneously enjoying a coffee really makes my soul sing.

While cafes like this are not common, the trend is on the rise with the aforementioned ‘newtro 뉴트로’ phase. This harks back to vintage inspirations mostly from the 1970s and 1980s. I can’t say how this started, but you’re able to see the popularity spreading in music videos such as BTS’s ‘Dynamite‘ where the stars look like they’ve walked out of a set from Saturday Night Fever.

How To Get Here

Of course, you have to be traveling in Yeosu to reach this gorgeous little cafe. If you’re coming straight from the airport, take the green bus (numbers 330, 31, 35, 31) just outside of the main airport gate for 55 minutes. Get off at Dong-gwang Tang (동광탕 국민연금공단). After departing, cross the road and turn left at the next main road. Walk for about 10 minutes and New Village Cafe will be on your right just past the small crosswalk.

If you’re coming from Admiral Yi Sun-Shin Plaza, take the green village bus (2, 555) directly behind the admiral’s statue. The ride will take 4-5 minutes. Get off at Sujeongjigu Haengbokjutaek (수정지구 행복주택) and the cafe is just up the road on your left. Cross at the crosswalk to enter.

This incredible cafe is a must-see if you’re visiting the region. It’s the perfect place to spend a lazy Sunday morning or a quiet weekday afternoon, as its location is not too far from the hustle and bustle of central Yeosu. Perfect for retro and vintage lovers, you can freely snap photos here and recall the sometimes difficult, yet memorable days of 1980s Korea.

And while you’re at it, why not listen to my absolute favorite Korean song from these times? If you’re lucky, you just might hear it playing.

Want more? For amazing cafe recommendations in Korea, here’s a great place to get started – one of the most famous stops in Seoul.