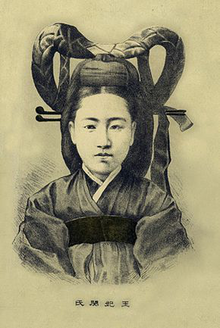 The Joseon Dynasty, arguably Korea’s best-known dynastical period, began in 1392 and lasted just over five centuries. It ended with the annexation of Korea by the Japanese in 1905, after years of turmoil on Korean soil, including the murder of the last queen of Joseon: Empress Myeongseong. Known colloquially as Queen Min, she was a person of great knowledge and arguably the most powerful woman in Korea’s history. She’s a historical figure worth knowing and remembering, and so we’ve put together a small tour of locations where you can visit and honour the ultimate queen of the Joseon dynasty.

But first; a little history.

Queen Min was born into the aristocratic class and married King Gojong, the 26th and final king of Joseon, when she was 16 and he was 15. At first they did not get along; he was into his parties and drinking, while she preferred to stay in her quarters reading. In fact, she educated herself far more than any queen ever had, reading books reserved for 양반 (yangban – noblemen) to learn about philosophy, history, and science. The queen was especially concerned with affairs of the state, and in her early twenties began actively involving herself in politics.

During her time as a monarch, Queen Min was a force to be reckoned with. She invited western trade and influences into the country, in an aim to force out the Japanese who had a monopoly over trade after a treaty was signed allowing them access to Korean ports. She established English language schools and commissioned a special mission to the US to educate themselves on American history and observe the American way. She also promoted religious tolerance and pluralism, despite being a devout buddhist herself.

King Gojong was the twenty-sixth and final king of Joseon, and the first emperor of Korea. At age 12 he ascended the throne with his father Yi Ha-eung as regent (also known as Grand Internal Prince Heungseon), and he married Queen Min in his mid-teens. After the birth and death of his first son with the queen, he was encouraged by the Grand Internal Prince and successfully fathered a son by a consort. While this was happening, Queen Min had secretly been gathering a faction of powerful officials, and together they sought to impeach the Grand Internal Prince and have Gojong rule himself. At 22 years old, King Gojong was more than old enough to reign independently, and so, with his support, his father was impeached and sent to retire at the royal residence.

With the reigns handed to her husband who knew fairly little about kingly things, Queen Min was in full control. She had the concubine and the price expelled from Hanseong (the historical name for Seoul), and she placed her own family members in high-ranking positions within the king’s court. As intelligent and well-versed in state affairs as she was, Min was looked to by the king for support and advice. As time went on, the relationship that began rathe frigidly blossomed into one of caring and love. King Gojong admired his queen, and they often went on walks together through the palace gardens.

Queen Min was not a fan of Japan’s attempts to control Joseon, and had made it known through her invitations into Korea for western countries. The Japanese were well aware that she was the only stepping stone to cross to controlling Joseon, as King Gojong often went to her for opinions and advice. As such, Queen Min was killed by Japan. It’s generally agreed by scholars that the Japanese Minister to Korea, Miura Goro, commissioned the assassination. She was murdered in her residence in Gyeongbokgung Palace on October 8th 1895. With the support of the Hullyeondae (Japanese-trained Korean soldiers), Japanese agents stormed the palace, dragged women out onto the courtyard of the queen’s quarters and proceeded to hack them to death with swords. They murdered three women in total and, once satisfied they had killed the queen, the assassins burned her body. The murder of Queen Min and the concurrent battle between the Hullyeondae and the King’s Guard is now known as the Eulmi Incident.

In the aftermath of this event, Prince Ito Hirobumi of Japan was assassinated by famous pro-Korean independence fighter An Jung-gun. In Japan, fifty-six men were charged with the murder of the queen, but all were acquitted of their crimes by the court of Hiroshima due to a ‘lack of evidence’. King Gojong and his son by the queen, Prince Sunjong, found refuge in the Russian legation but later, with their support, regained the throne and held a grand funeral for their late wife and mother.

So, as you well now know, Queen Min is a woman well worth remembering and honoring. To do so, we have put together a tour, of sorts, that you can follow through Seoul and to other parts of Korea, to visit locations that featured in the queen’s life.

The queen resided here with King Gojong for the latter part of her life, from the completion of its construction in 1888 until her death in 1895. It was torn down by the Japanese in 1909, but was reconstructed and opened to the public in 2007. Geoncheonggung is also the site where, in 1887, the first electric light in Korea was installed and lit.

Not only Queen Min-related for housing Geoncheonggung thus being the location of her assassination, the Gyeongbokgung Palace grounds also house physical proof of the love between King Gojong and his queen. Hyangwonjeong Pavilion, the famous reading room on the lake full of waterlilies, was commissioned by King Gojong for Queen Min and was constructed at the same time as Geoncheonggung. The bridge to the pavilion was the longest wooden bridge built during the Joseon period. Originally, it was was built on the north side of the pond, but was reconstructed to the south when it was restored in 1953. Now, restoration projects are ongoing to move it to its original location.

Being a royal residence, Queen Min lived here before she moved into Gyeongbokgung Palace in 1888. The queen’s quarters here are in Daejojeon Hall, towards the rear of the palace. Unfortunately, the original structure was destroyed by fire in 1917, but has since been reconstructed using materials taken from Gyeongbokgung Palace.

Named as a palace, Unhyeongung was rather a royal residence. It’s where King Gojong lived with his father before becoming king, and where his father was retired to after his impeachment. Norak Hall inside Unhyeongung claims to be the site of the wedding ceremony between King Gojong and Queen Min, though this is not confirmed. Despite this, it’s a location worth visiting. Nowadays, Unhyeongung Palace is a public museum with free entry. They also host an exact reenactment of the wedding ceremony twice every year, in spring and autumn.

Established by missionary Mary Scranton in 1886, Ewha Women’s Institute boasted Queen Min as one of their patrons. Now a top Korean university in Seoul and the world’s top women’s institute, Ewha Women’s University sits in the popular Mapo district with a beautiful campus housing a photogenic library and western-style buildings. It even has a museum containing several national treasures, including some of the famous Joseon white pottery.

The official royal ancestral shrine, Jongmyo shrine was where the tablets of the kings and queens of Joseon were enshrined after their deaths. The tablets of both Queen Min and King Gojong are held here. Every year on the first Sunday of May, the Jongmyo Jaerye, a memorial service for the royals, is reenacted here as well as the Korean Royal Palace Culture Festival.

Yeoju is the birthplace of Queen Min, and the geographical origin of the Yeoheung Min clan into which she was born. A neighbouring city to Incheon, Yeoju is famous for its pottery and hosts the World Ceramic Expositon every year.

The Hongneung Royal Tomb houses the tombs of both Queen Min and King Gojong, both having been raised to status of Empress and Emperor before their entombments (Queen Min posthumously and King Gojong before his death). These tombs are the last built by the Joseon Dynasty, and resemble the imperial tombs of those in China at the time.

The last queen of Joseon and first Empress of Korea, Queen Min was an incredible woman. Assassinated because of her power, she was a highly intelligent woman held in high regard both by both people of her time and nowadays. Locations stamped with her history can be found throughout downtown Seoul and in the surrounding Gyeonggi Province. Pay these places a visit and walk the steps of one of the most influential women in Korean history.

Listen to the ‘Queen’ episode of our podcast and hear about Queen Min and other Korea-related ‘Queen’ stories.