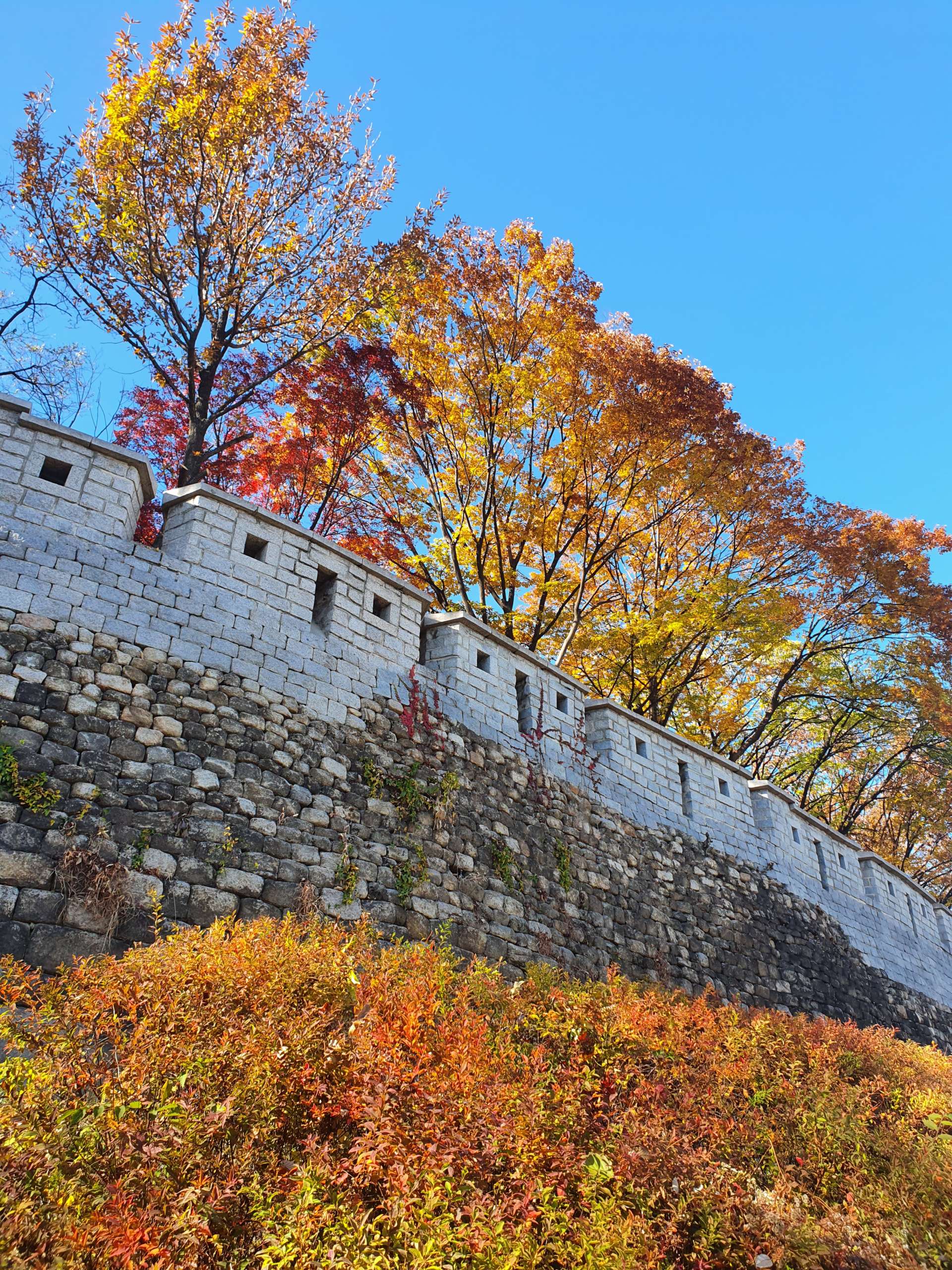 As the weather begins the decline of its warm, sunny days, we might as well take advantage of the few bright evenings left. Additionally, as COVID cases continue to rise, we need a safe place to socially distance ourselves while still getting our daily exercise. One of the best places to do this in the city is the Seoul City Wall, aka Hanyangdoseong (한양도성).

Some people visiting Seoul might not know that the massive city originally had a wall built around it. The wall was first designed to follow the peaks of Seoul’s main mountains: Baegaksan (배각산), Naksan (낙산), Namsan (남산), and Inwangsan (인왕산). Official construction of the wall began just after the start of the Joseon Dynasty (1392-1910) in 1396. It was designed to protect the new capital from invaders, whose name was not Seoul but Hanyang. Although the wall has seen its fair share of wear and tear, it was officially reconstructed and opened to the public in 2007.

There are many famous sites along the wall. Firstly, the eight wall gates are built up of four main gates and four smaller gates. As the main gates are far more popular, it’d be good to look at them first.

The Northern Gate is called Bukdaemun (북대문) and is the only gate with its sides connected to the wall. The tower that you will see there was a new addition finished in 1976.

The Eastern Gate is known as Dongdaemun (동대문). It’s located right next to the famous art and shopping center DDP, or Dongdaemun Design Plaza. You can visit this underground shopping center for unique gifts and delicious food, or stop by one of its numerous art exhibitions featuring big names from around the globe.

The Southern Gate is Namdaemun (남대문), also known for its famous shopping scene. Namdaemun market is typically geared towards older generations, but there are plenty of affordable fashion and beauty stalls here as well. My favorite stop is the Flower Market, which offers thousands of flowers and plants at incredibly low prices. As their main customers are flower shops and restaurants, they open their doors in the wee hours of the morning: 3AM, in fact. Although the market is what many people know Namdaemun for, we must not forget the arson attack in 2008. Namdaemun was one of the few original surviving structures from the Joseon Dynasty; it was a miracle that it had somehow survived the Japanese occupation, which saw the destruction of most symbols of Korean power. A local anarchist set fire to the beautiful structure in protest of the government and although it has been rebuilt, the feeling of loss lingers.

Lastly is Seodaemun (서대문), the Western Gate. There is so much to saw about Seodaemun and its smaller gate that you’re better off reading our full guide here.

Just like the large gates, there are four small gates to visit. The first is the Northwest Gate, Changuimun (창의문). This is the only auxiliary gate whose tower has survived to the present day. Considering most structures in Korea were made from wood, this is truly something to be proud of. It was destroyed once in its lifetime, during the Imjin War in 1592, but was rebuilt in 1741 and remains intact today.

The Northeast Gate is Hyehwamun (혜화문). Many people reading the name will already associate this gate with the artistic neighborhood. This is known for its local theater productions are there are various art schools nearby. Come here for a youthful and lively atmosphere, cheap eats, and fantastic performances by Seoul’s up-and-coming stars. If you’re interested in more visual art, you can also visit the Ihwa Mural Village – just be prepared to climb some steep hills.

The Southeast Gate is Gwanghuimun (광희문). The gate was once known as the ‘Water Channel Gate’. Similar to Namdaemun, this was one of the rare structures that survived untouched through Japanese occupation. Sadly, the gate was mostly destroyed during the Korean war with the current version rebuilt in 1976.

Lastly, the Southwest Gate is Souimun (소의문). This gate unfortunately no longer exists, but visitors can find a marker where it once stood. You can find it adjacent to the Joongang Ilbo Newspaper building.

Due to the long history of these gates, it was nearly impossible to keep the original structure. This is why only one gate is still attached to the original wall, with the rest of them being scattered in and around the city. That being said, there are still many walkways along the wall that you can enjoy.

There are many pit-stops along this 18.6km wall. The first is to visit its highest point on Baegangmaru Summit (백악마루). The views are undeniably beautiful and avid hikers will regret not making it up to this peek. Be sure to take a photo with the stone post to prove to your friends that you’ve actually been there. Otherwise, how can we trust you?

You can also visit the Baegak Gokseong Lookout (백악곡성), the only lookout open to the public. Get a sense of what it would have been like to stand guard on this massive wall during the Joseon dynasty. This is one of the best places to soak up the stunning views of the mountains around Seoul.

If you’re a massive history geek like me, be sure to stop by Gyeongshin High School (경신고등학교). Although the school itself is not for visiting, this is where you can see traces of the original wall.

Bukjeong Village (북정마을) is a hot spot that was built in the 1960s and 1970s. It holds over 500 tile-roof houses that haven’t changed a bit since the mid-century. This is why this neighborhood has become a hotspot for filming dramas and films set during this time. It’s absolutely charming, which is also transitioning it into a more tourist-friendly stop in Seoul.

There are hiking options for everyone along the Seoul City Wall, which is why it’s one of my first suggestions in the city for active travelers. There are main five walking trails available that vary between one and three hours in length. Visit the Seoul City Wall official website for detailed breakdowns and maps. It’s also good to note that many of these paths are now accessible by wheelchair. Pay extra attention to paths that are currently under construction, such as the Dongdaemun Path (Spring 2021).

I’ve been lucky enough to have hiked nearly all of the trails myself. Even the rebuilt sections of the wall are beautiful. I think my favorite path to take is Hyehwamun at night. Overlooking the city lights from the high-up park is truly magical. Namsan Mountain is also good, of course, as it is one of the highest peaks in the city. It’s also famously known for its Kdrama romance scenes. Namsan Tower is a great place to get what is essentially a 360-degree view of Seoul without paying a hefty entry fee.

What to See & Do in Gongju Hanok Village