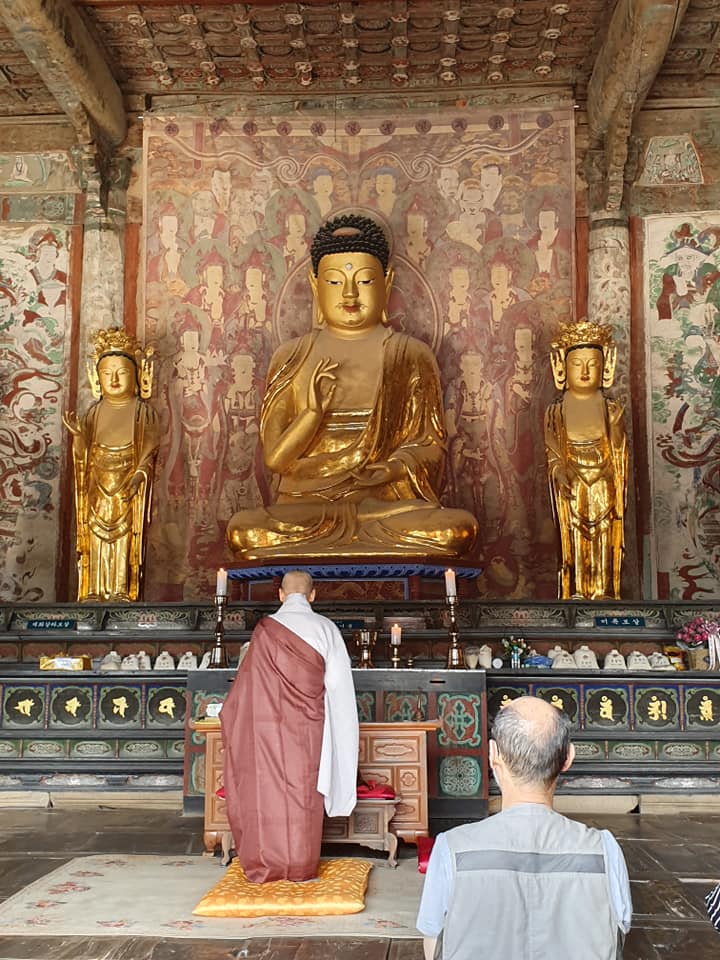 When I became a Buddhist at the age of 16, I realized that my faith was something that many people connected with, regardless of what they identified themselves as spiritually. And while my dedication to practice has fluctuated over the years, one thing has always remained certain: temples bring peace of mind.

Living and practicing predominantly in the U.K., there weren’t many temples for me to visit. You can imagine that, upon my arrival in Korea, I was pretty stunned. There were suddenly so many temples available; choosing just one would require a never-ending list of day-trips.

There was also something else making things tricky. Buddhist practices and etiquette can shift depending on the school, branch or country you’re in. So, I started to wonder…

How do Koreans bow?
What can I wear inside the temple?
Was it supposed to be silent or could I have discussions in the main hall?

Over the years, I’ve set out to find answers by directly asking monks, nuns, friends, and just generally making many mistakes along the way.

Buddhist or not, these are rules anyone can follow when they’re traveling around the peninsula. In Buddhism, we don’t discriminate against visitors, curious onlookers, or those who merely want to practice meditation. Even if you have your own spiritual beliefs, Buddhists welcome you to their sacred spaces with open arms. So take a deep breath, shake off those inhibitions, and let’s learn about proper Korean temple etiquette together.

*Please note that this article is discussing the preferred etiquette of Korean temples specifically and that traveling in other parts of the globe, including other countries in East Asia, may see different rules discussed.

When is short too short?

Korean summers are hot. As such, Korean temples don’t have a strongly enforced dress code. You won’t see boxes of modesty scarves outside of the entrance like you may have in South East Asia. However, if your clothes are a bit revealing or tight, expect stares. In general, monks and laypeople ask that you wear loose, simple colored clothing.

Another request that is not to wear any apparel with obvious branding on it. Brand names are distracting and reveal a temptation to those practicing mindfulness. So, do everyone a favor and leave Baby Phat at home.

In general, most temples feel comfortable with natural hair colors. Again, they’re not going to turn you away if you’re rockin’ that neon green glow, but they also encourage laypeople to maintain a natural look to keep away from material interests and potential distractions.

In short, there are some expectations that monks and laypeople have. It’s best to come modestly dressed. Korea is more accepting than other Buddhist countries I’ve visited in the sense that they won’t actively turn people away for their appearance. Just remember that taking the extra time to wear simple attire will make those running the temples feel more respected.

One of the most common questions I get is: How do you bow? There are a lot of answers to this, so I’m going to offer you the version that I’ve seen most often in Korea. In my old temple we weren’t even asked to bow on the floor, so keep in mind that this is once again from a Korean Buddhist standpoint.

Buddhists bow in front of Gods, Goddesses and Buddha figures. This includes smaller versions scattered on temple grounds as well as towering ones in the main halls. When we appear before the image of these beings, we bow in respect and pay homage to our efforts to be more like them.

When doing a standing bow, bring your palms together at your heart. Take a bow either to the waist or at a 45-degree angle and keep your head and eyes down. Return to your straight position, repeating the action as many times as you’d like. I usually bow 3 times.

I see many foreigners and Koreans alike enter through the main altar doorway, particularly without bowing. However, this is something not typically done. In order to show respect, we enter from a side door, making sure to bow as soon as we walk in. If you do happen to pass by the front entrance, bow politely, and make your way to the side. And don’t forget to take off your shoes!

This is a bow that many of you may not feel comfortable to try, as it suggests a more religious and devoted character. Do not feel like this bow is required – if you simply want to walk around the hall to look at the artwork, feel free!

When inside the temple halls, many people take a cushion and place it on the floor in front of them. This is for comfort. When doing a kneeled bow, the first part is the same as a standing bow. Bring your hands together at your chest and bow at the waist.

The following move is to keep your hands together at your chest, but to then drop to your knees. If you haven’t guessed yet, you should be facing the Buddha. When on your knees, bring your palms downwards on either side of your head as you let your forehead touch the ground. If you can’t reach that far, don’t worry. No judgment here. After tapping the ground, lift your palms upwards slightly to the sky and back down again with palms downward.

Your feet should be crossed over one another slightly. Repeat this motion as many times as you’d like – I would suggest somewhere between 3-5 if it’s your first time.

Chanting is, of course, done in predominantly Korean. There are also Sanskrit-based chants, as well as simpler ones including only a Buddha’s name. Chanting is not required and you do not need to feel like it’s expected of you. If you’re a Buddhist interested in Korean branches of Buddhism, inside the main temple hall there will be a shelf with prayer books that you can flip through. There are several times a day where group chanting takes place in temples – if you check their website you may be able to join and follow along.

Check out one of Korea’s most beloved monks, Young-in Sunim, and his hauntingly beautiful chants here.

http://www.whatshanyourmind.com/index.php/2020/03/22/whats-han-your-mind-podcast/Was this helpful for you? I certainly hope so! If there are any pressing questions left on your mind, leave a comment below and we’ll be sure to get back to you! This is one of several articles I’m going to be posting about Korean Buddhism, so stay tuned to find out more.

Want to learn more? Check out our new podcast here and tune in every Friday more amazing stories on Korean history, culture and travel.

Jeju Beach Life: Where to Enjoy the Best Views on the Island