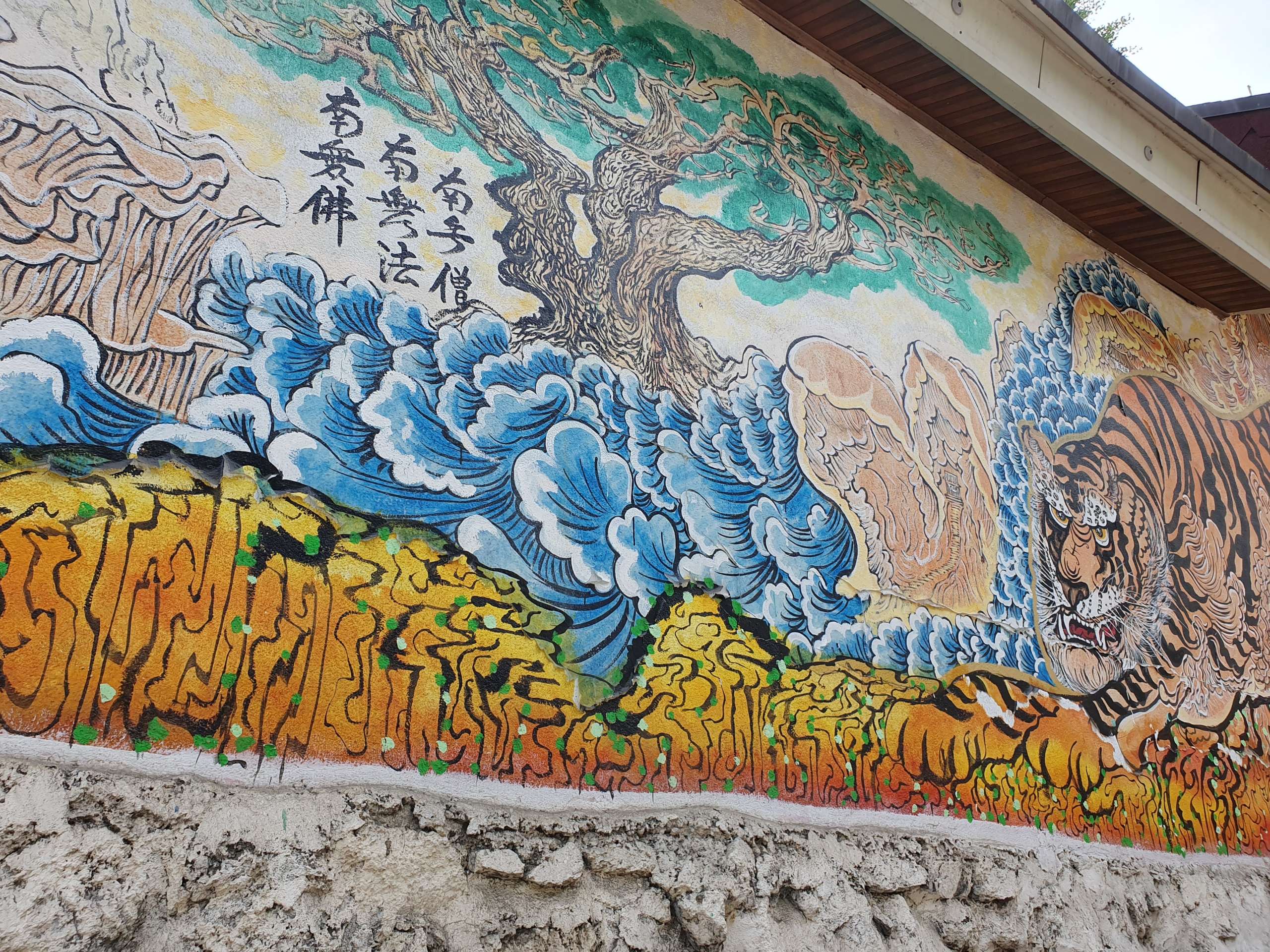 When one looks closely at Korean motifs, beautiful patterns and imagery embodying propitious meanings are everywhere. This is a tradition that stretches back to ancient Korea, but what exactly is it? The idea that things should be practical, albeit adorned meanings, serves as a reminder of the country’s societal virtues.

This concept applies to items of a grand scale such as palace architecture, to everyday objects and furniture. One of the most popular examples is minhwa (민화), or folk art said to represent everything from the common people to soaring powers such as the sun and moon. These were paintings from the Joseon dynasty that combined symbolism as well as content. While their value may have shifted over time, they’re still hot decoration choices for cafes, homes and even subway stations.

This is only one example of many. Although this is a topic that could stretch out into a several hundred page book, we’re up for the challenge of a 15-minute read. Dive into traditional motifs and get to know a bit more about their place in Korean society: both ancient and contemporary.

One of the most iconic images of Korean motifs rests behind the Joseon throne as a screen painting called Irworobongdo (일월오봉도). Five elements of design are necessary here: the sun and moon, five mountains, pine trees, oddly shaped rocks and surging waves. This painting can be seen everywhere, most famously in Seoul’s main palace: Gyeongbokgung.

Gyeongbokgung Palace is a prime example of symbolic motifs within historical architecture. The palace is famous for beautiful mosaic tiles of floral design, as well as chimneys depicting the 10 symbols of longevity. These are rocks, mountains, water, clouds, pine trees, the fungus of immortality, tortoises, cranes, deer and the sun (Curious to hear more about those? Check out our podcast here). Auspicious Chinese ideograms embellish walls noting “a long life without regrets”, “wealth and rank” or the ever-charming “many sons”. Welp. It’s not hard to see what was valued in Joseon Korea.

When looking at the book covers of Joseon scholars, we can spot royal images such as dragons and pheonixes. Bats and butterflies note fertility and longevity, while instruments demonstrate intellect and talent. The seven treasures (gold, silver, lapis, crystal, coral, agate, and pearl) also appear alongside minor themes like pomegranates, apricots, and gourds. One can see that these motifs inspired scholars of the morals they were to follow. For example, a bamboo tree does not sway or break under pressure. Thus, scholars were reminded to follow the lead of nature by never bending to someone’s will.

Wondering about the swastika? Yes, it’s a common symbol all around the world and not in relation to Nazis. The swastika is an ancient character for 10,000 or ‘man’ in Korean (만). The original meaning was also ‘gathering good auspices’ in Sanskrit. The repetitive pattern of this design in Korean architecture suggests something without a beginning or end, referring (once again) to longevity. Sick of reading that word yet?

Did you know there were auspicious choices in relation to one’s clothing? Much like we dress with purpose today, ancient Koreans did not think so differently. However, their clothes might have reflected their ideals or morals as opposed to their inner self.

Koreans favored light colors such as white or pale blue, even earning them the nickname ‘the white-clad people’. This came from the belief that such colors were ‘polite’ and ‘civil’, and I suppose one could even say ‘non-offensive’. This taste also originates from a reverence of nature and the pursuit of a simple life, something I think we could all benefit from in our digitally addictive world.

Even knots, which served as functional aspects of clothing, took on symbolic meanings. For example, knots suggested a desire that all of one’s undertakings would come to a positive outcome. Additionally, knots might represent a newly married couple living in harmony, or an elderly person living a long life. If you want to try your hand at knot-making, we strongly recommend a workshop in Bukchon Village.

For royal clothing, motifs were even more significant. The King and the Crown Prince wore embroidered patches of dragons, a symbol of royalty that had the ability to expel evil. The Queen and Crown Princess were decorated with phoenixes that symbolized elegance and dignity. Beside them stood the officials whole also wore patches on their robes. Long ago, people believed that those who lived a life of contentment and solitude became cranes when they died. Thus, gentlemen scholars working under the King (seonbi, 선비) believed these images were a symbol of personal integrity and bore them on their chest. On the other hand, military officials wore images of tigers and leopards to represent courage and valor.

What of fish as Korean motifs? Fish were often used in decorating pottery or lacquerware, my personal area of expertise. A pair of fish symbolized life going the way you wish, as well as wealth and social status. This is because fish are lively and therefore compared to being successful. A pair of fish symbolized – you guessed it – many offspring. Thus, it was customary for a groom’s family to send gifts of fish to their future bride.

The pattern of using animals in relation to marriage stretches as far as bugs. Shuddering? Let’s take a step back here. When one notes the Confucian moral rules, love is the pinnacle (awww). The joining together of two beings was not only a matter of human ethics, but a natural phenomenon. Traditionally, Koreans personified this belief in the image of two mandarin ducks, wild geese or butterflies. These creatures appear on folding screens, wooden furniture and lacquerware up until the present day. Wedding garments were also decorated with these images, although you won’t spot it on a white dress.

Characters for longevity and good fortune are generally circlular in design with the circumference most often defined with the character for ‘bat’. This is because the Chinese ideogram for ‘bat’ is the same in Korean as ‘fortune’ (bok, 복). Following along? That’s why you can still see images of bats everywhere – from pillow case ends to hair pins. People previously believed that bats lived for 1,000 years, helping to represent longevity. Four bats surrounded depictions of the five blessings. The five blessings (obok, 오복) were necessary for a meaningful life: longevity, wealth, health, virtue and a peaceful death (aka, all the stuff we’ve been talking about up until this point).

Let’s step a step further back in the history of Korean motifs. During the Unified Silla period (668-918), the ends of roof tiles bore grape patterns or vines alongside (male) children playing. You can imagine the meaning, I’m sure. More boy babies, please! Oh yeah, and let them live for a long time! And keep having sons! Sons galore!

For the Goryeo dynasty (918-1392), black and white celadon inlay was a defining feature of this time. It remains one of the most valued Korean art forms and is continuing to gain international attention for its beauty. Landscapes were a popular design choice for celadon jars, silver-inlaid bronze kundikas (Buddhist ritual sprinklers), incense burners, and lacquerware mother-of-pearl boxes that held Buddhist sutras. You might spot a single cloud in a vast sky or a weeping willow to represent the Goryeo idea of ‘living free from worldly cares’. More so than Joseon, these images reflect a deep attachment to faith and spirituality.

As with most topics, there is always more to be said. If you’re curious to know more about Korea’s mythical creatures, check out this nifty (and quick!) guide at Life in Korea. There’s always more to learn, so if you’re curious for more details leave a comment below or reach out to us on our social media. Until then, keep on learning.

Seosomun Historical Park: Seoul’s Hidden Gem (What to See & Do)